What is No Limit Fantasy Sports?

To start things off it's important to explain what Fantasy Sports is and how it works. Fantasy Sports is a term that refers to a contests of skill in which users compete against each other by creating teams consisting of real players from a professional sport.

You can win these contests by choosing the players that you think will perform well in the real life sport games. These players get rated on their performance in the games that they play for their club. A point system, based on the individual actions of the players, is used to decide the score of the individual player on the No Limit Fantasy Sports platform. These points are called Fantasy Points (FP), you can see them here on the image below for each individual player. The more points your player has the better, because if your team has the most points at the end of the contests you will win.

So you actually choose, real life players from your favorite sports on No Limit Fantasy Sports. You get a fixed budget (called a salary cap) per team which you have to use to buy your players with (see the image below). 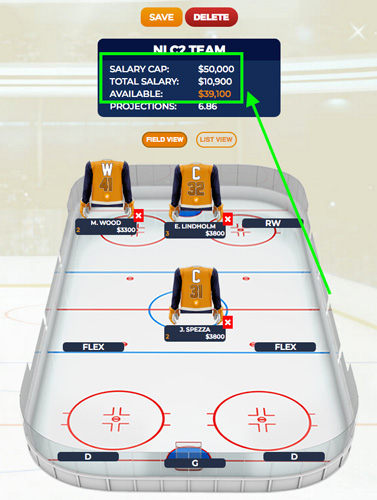 This is where the skill aspect comes into play, trying to find a good mix of "expensive and high scoring players" and to find the "cheapest" players with the highest scoring potential.

But of course it's about the actual live performance of the player in their upcoming game. So you should use the Fantasy Points (FP) as an indication of the performances of your players but this can change in the upcoming game. Once the game starts we track all the live events of the game for your players and assign them a (live) score, you can see that here below in the image. And this (live) score is what it's all about. You can see in the image below we track the individual (live) score but also the total of the whole team which you can see above the field. We show the Fantasy Points (FP) as well so you can see if the player is performing above or below his projection. 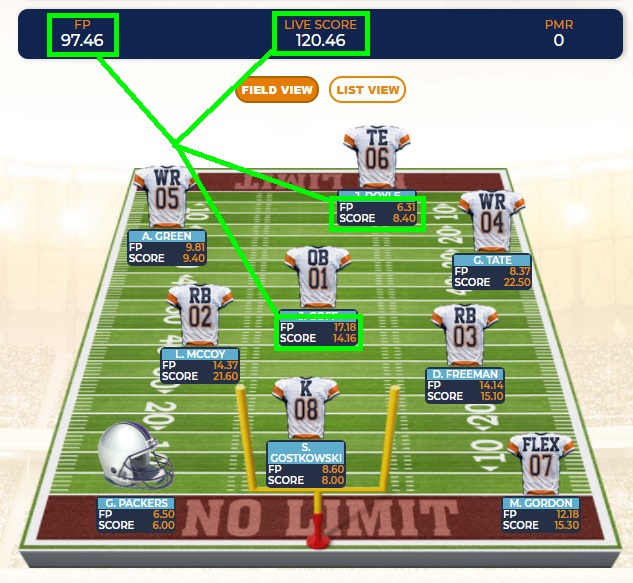 On the Live Score page we also track your opponents their performance which you can see below your own team, as you can see in the image below. 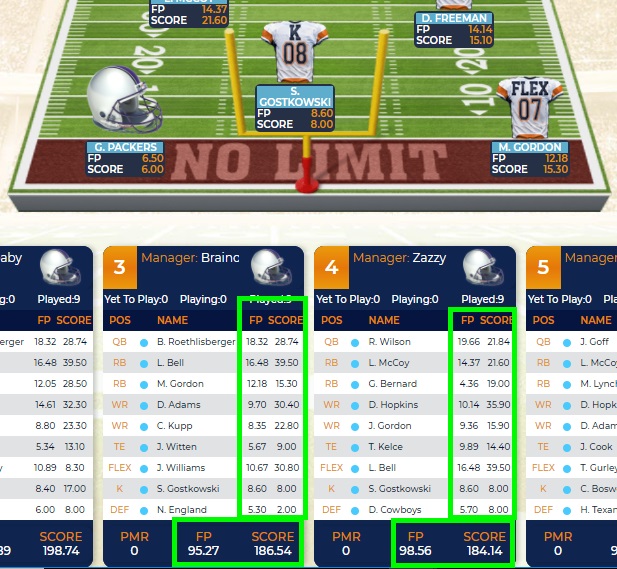 To increase your chances, to select the best team, you can do research on the individual players to see their past performances, injuries updates, even check out the players social media through the No Limit Fantasy Sports platform. It's all about getting to know your players and to make sure they are the best fit for your team.

After the team is carefully selected find a contest you want to enter on the Contest page, which can be free entry or a paid buy-in. Once entered, you compete against the other contestants and the teams they made. The end goal is making it to the top of the contests by having the highest total (live) score with you team. If that happens you will win a certain percentage of the prize pool, depending on your final position in the contest. 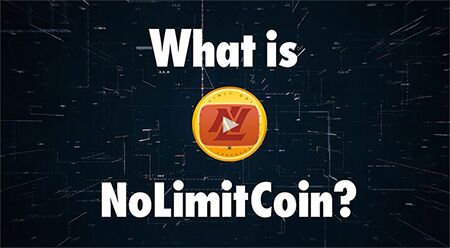 NoLimitCoin (NLC2) is the exclusively listed cryptocurrency used to power our No Limit Fantasy Sports platform. If you want to enter any contests that require a buy-in, this buy-in comes in the form of NLC2 and each coin has real value attached to it. You can buy your NLC2 here or on the following cryptocurrency exchanges

NLC2 allows us to have the lowest rake fees of any fantasy sports platform, we have cut rake fees by up to 50% over our competitors. Watch our Video What is NoLimitCoin? here to learn more:

How to get started with No Limit Fantasy Sports?

There are 4 simple steps to get started.

1 - Login and pick your sport.

2 - Create yourself a team, click this here to see how

3 - Enter a contest, click this here to see how

4 - Watch your team's performance on the "Live Score" page, click this here to see how this page work

How do I create a team?

To create a team visit the "My Teams" page. Once on the page click the "Create Team" Button, highlighted in the image below.

Make sure you check the required number of players and positions of your team. This is different per sport but you can check where it says "Team Format" on the image below

Or when you are on "Field View" you can see all the positions on the field itself which are needed to form a team. 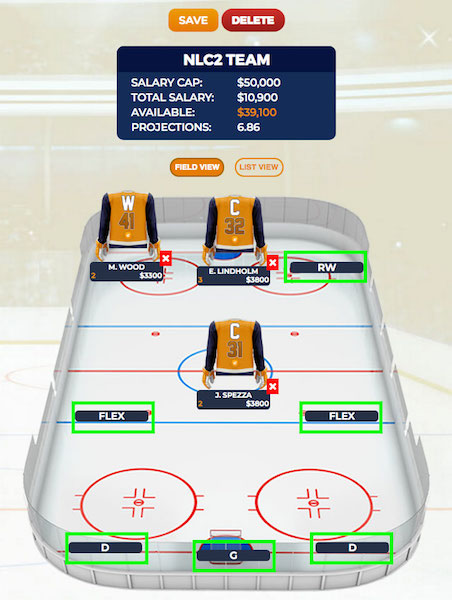 Don't forget you that you have a certain budget for your team which is called "salary cap". In this section it also shows the "available" money you have left to spend on your other players

How do I enter a contest?

Before entering a contest you need to have a minimum of 1 team.

To create a team visit the "My Teams" page. Once on the page click the "Create Team" Button, highlighted in the below screenshot.

Once you have a team, click on the "Contests" menu item. This will bring up the full list of contests for the week, in order to see the contests that are currently open, click the "Hide full contest" box as seen in the below screenshot. 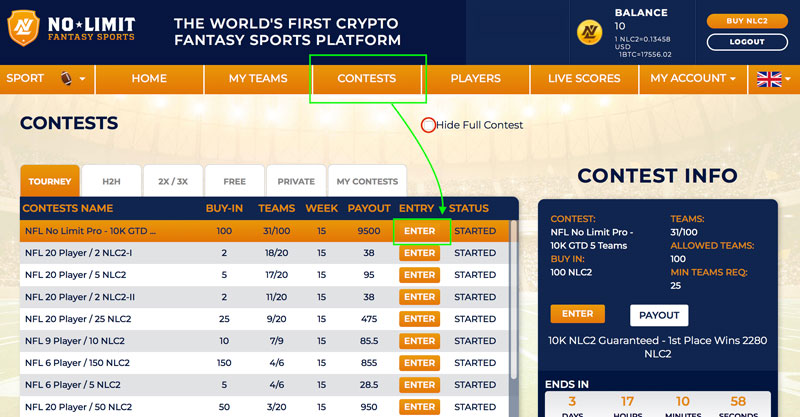 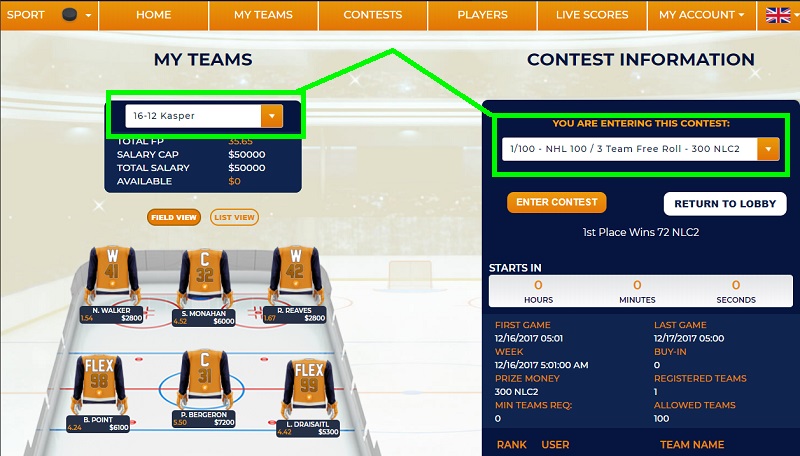 There are some free contests for you to start off with if you are an inexperienced user and want to get some fun and exciting practice. 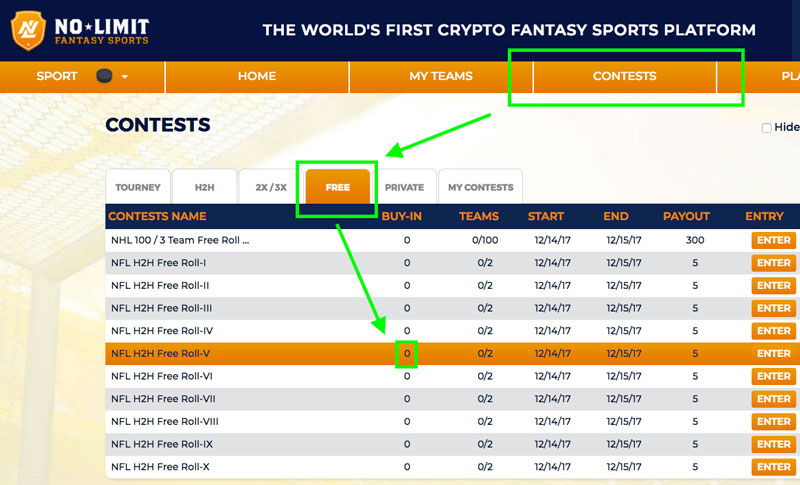 How does the "Live Score" page work?

The "Live Score" page is the users control panel. From here you are able to track progress in the days events, your contests and even chat to the participants you're competing against!

The top of the page shows the upcoming events featuring the teams from which players have been selected.

The other main features are neatly displayed below the live matches and are shown in the below screenshot, we will go over each one and break it down.

How do I research players for my team?

Going over to the "Players" page is the first step, this will allow you to sort through the players you want.

You can filter the players by clicking on “Salary”, “FP” (Fantasy Points), “Status” and more.

If you click on the player's name it will show you a pop-up of the most recent stats of the player. If you move your mouse over the different abbreviations an orange pop-up will explain the short code for the specific statistic (see image below).

By clicking on any of the players names, the image below will pop up which will neatly and clearly show the players performance statistics.

To get the real fine details of your players we even offer the option of looking at the players social media channels. If you want to get a real edge on your competitors all the data available can and will make the difference.

Can I still change my team even when the contest has started?

You can change all the players in your team that haven't started playing in a match yet.

You can do this either right from the homepage if you hit the edit button. 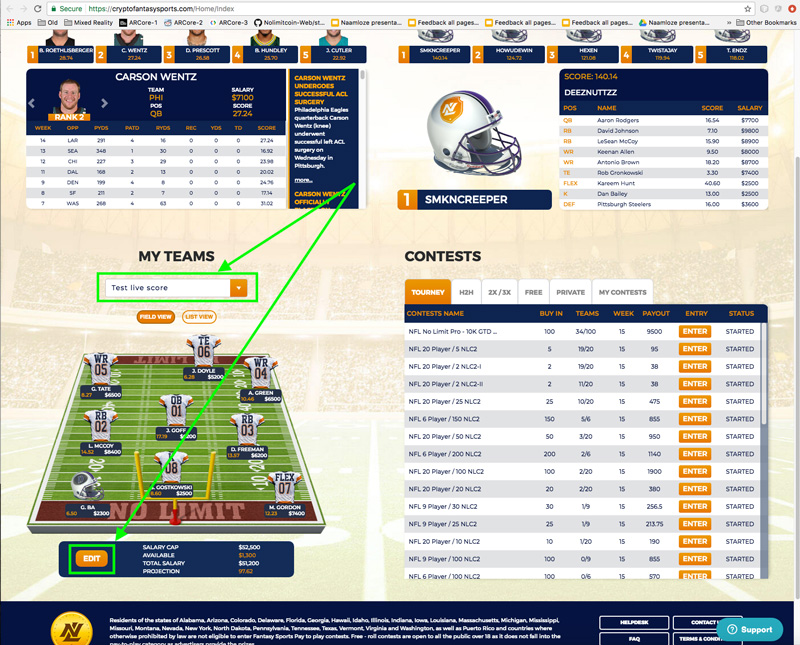 Or if you go to “My Teams” page you will see the edit buttons on the bottom of your team. 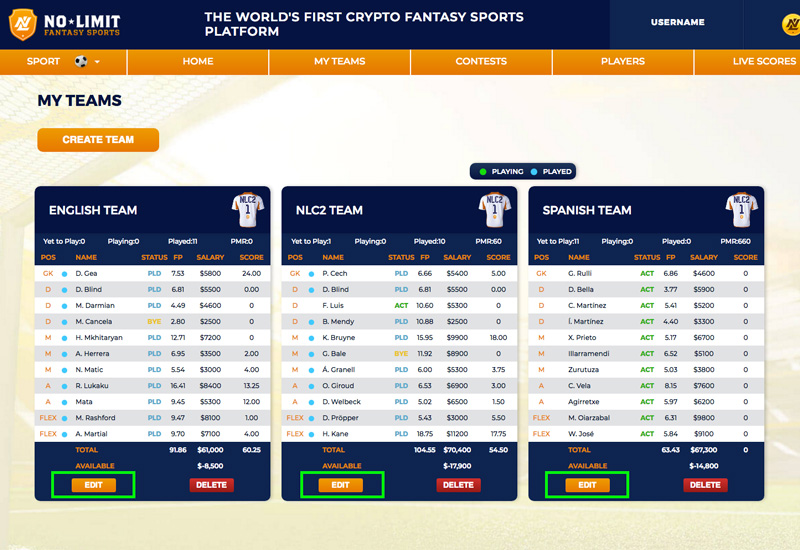 If you click the edit button it will take you to the “Manage Team” page where you can remove non playing players from your team and replace them when pressing on the red “x” (on Field view) or “cut” button (on List view). 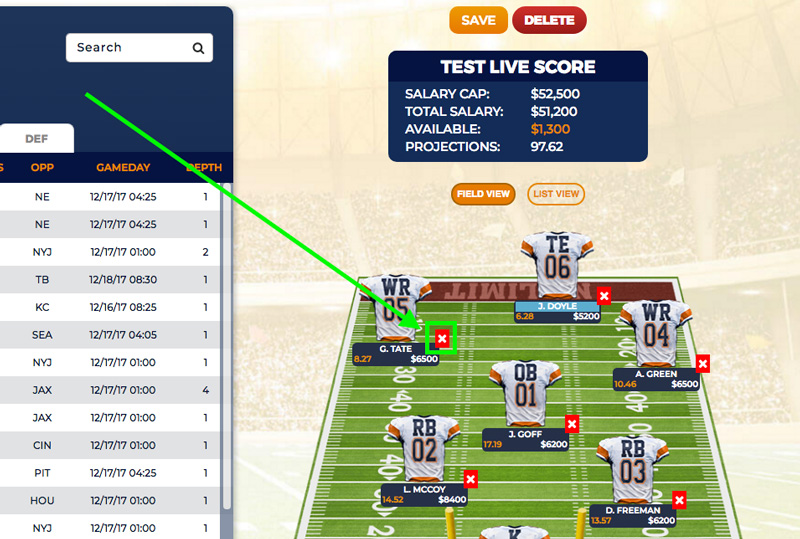 How do I withdraw myself from a contest?

To withdraw from a contest that you have entered in simply head over to the "My Contests" tab under the "Contests" menu item and click on the contest you wish to withdraw from. A withdraw button will show up next to your username 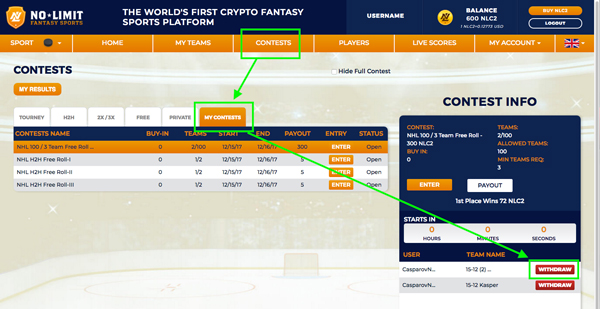 The contest info on the right of the image will give you an option to withdraw. Please note that you are only able to withdraw from a contests if none of the actual games have started yet for that week or day, even if none of your players are not playing in that first game.

It would be an unfair advantage for users to view the first games and see other players performance and based on that withdraw from a contest. You can however still change all the players in your team that haven't started playing. If you go to “My Teams” page you will see the edit buttons on the bottom of your team.